Our 24 hours in Yogyakarta, Indonesia, had some unexpected surprises. The day featured shooting some arrows, almost falling out of a 4×4 on a volcano, and riding around in a neon, Pikachu pedal car. Not to mention visiting the country’s biggest temples! Sounds pretty interesting right? So here is what to do with a day in Yogyakarta.

Indonesia is famous for a lot of things, picturesque beaches with swings in the ocean, Komodo dragons, volcanoes and idyllic islands. But one of the lesser known places, Yogyakarta, has so much to offer that it is worth a stop. If you have flown into Jakarta and travelling overland across Indonesia, please stop in Yogyakarta. We took a train from Jakarta which cost between £10 – £25 a ticket, depending on the train and class of travel. This 8 hour journey is actually a pretty scenic one. You pass some really beautiful scenery including rolling hills, mountains and rice paddies. In Yogyakarta we stayed on Jalan Prawirotaman street which again I can recommend. It has plenty of bars and restaurants, tour operators and decent accommodation too.

We hired a driver for the day (it was the taxi driver that picked us up at the train station) for 500,000 IDR (£30). He picked us up at 9am and we headed to Borobudur Temple, one of the largest Buddhist monuments in the world. It is said that you should walk three times around the temple, in a clockwise direction, as a sign of respect. Many of the Buddha heads are missing, similar to those in Thailand, due to people stealing them to sell to museums. The views from the top of this temple are stunning, you can see above the green palette of trees and over to the misty hills in the distance.

Following on from Borobudur Temple, we drove to Mount Merapi Volcano. Without researching this beforehand, we thought we would be able to take a walk up the volcano, see the crater and stroll back. Oh how wrong we were. ‘You need to take a jeep’ our driver said as we arrived. The volcano trails are only accessible by jeep due to their rugged and rocky surface.

So, after 350,000 IDR (£20), we hopped into a open-air, off-road buggy. There were three stops on our tour, Museum Sisa Hartaku, Alien Stone and an old Bunker. The Museum housed remaining debris from the 2010 volcano eruption such as melted and warped motorbikes and animal skeletons. The Alien Stone is a huge boulder that was chucked kilometres away from the crater during this same eruption. The bunker was an emotional stop as sadly two people died in the 2006 eruption after being trapped by lava and debris. Although moving, none of these stops were worth the money to be honest, but the best part of the tour was bouncing around in the jeep. Like a boat crashing in the waves, we were chucked from left to right, unstable in our seats. The drive was pretty gnarly. The scariest part was when we climbed up a scree field, balanced on the edge of a rocky canyon for a photo-op. If the hand-brake was faulty, we’d have been a gonna. Taking photographs on this edge was easier said than done when you’re clinging on for dear life and your legs are shaking. All good fun though. On a clear day you can see the crater from this spot, and the path the lava flow cut out of the land, creating a gigantic gorge.

After being battered in a jeep, we headed back to our driver and on to Prambanan temple. This 9th century temple is the biggest Hindu temple in Indonesia. The temple was rediscovered in the early 1800s but it wasn’t until the 1930s that a full restoration programme began, which continues on today. However, this all seemed to be in the shadow of the rest of the amusement park that surrounds the temple. For example, a random statue of Spiderman is sat on a bench, or you could go to the petting zoo. You can even have a go at archery! All of this detracts your attention away from the magnificent temple. It somehow lessens their importance.

Going back to the archery, it is time to welcome Iain to Indonesia – the new guy in our photos! He is one of our best mates who has come to join us travelling around Indonesia for a couple for weeks. So, as boys tend to be when they get together, there is going to be competition – archery it was. Iain won, although he suffered an injury as the string burnt his arm on the release. Fool.

I couldn’t believe how excited I was over pedal cars covered in lights. These can be found at Alun Alun Kidul in Yogyakarta. At night, head to this park to see an array of different pedal powered vehicles, kitted out with neon lights and banging sound systems! Once we spotted one that had Pikachu on the roof, we knew that was going to be our ride. After a little haggle down to 40,000 IDR (£2.30) we hopped in, set the CD player to Taylor Swift ‘Shake it off’ and started to pedal! Like a slowed down, child’s version of Fast and Furious, we hit the road in a blaze of glory. You loop the park, bumper to bumper with fellow drivers, blaring music and singing along. It truly was hilarious! The four large Bintang beers we each drank beforehand definitely helped with the hilarity. I guess they don’t have rules about drink driving when it comes to pedal cars. 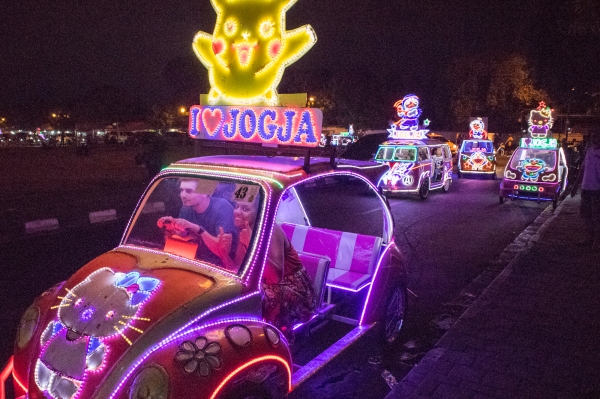 Yogyakarta is not on everyone’s list of places to visit, but if you can afford the time, I would recommend staying a night here at least whilst travelling Indonesia. With temples, volcanos and ridiculous pedal cars, it was definitely a pleasant surprise. Where else can you spend the day bouncing about in crazy jeeps and kiddy cars? 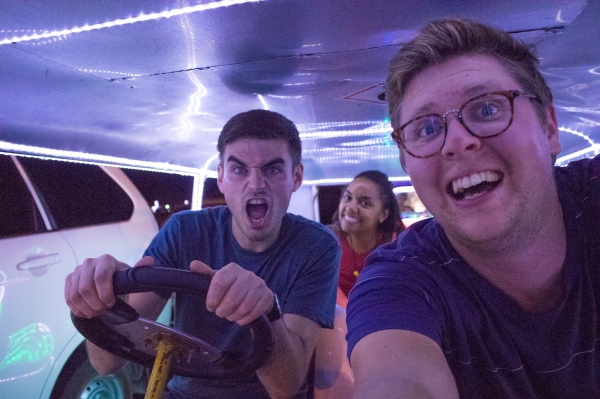