Before we booked our unforgettable trip to Ha Long Bay, Vietnam, we debated, 1 night or 2 nights stay? Well, we did two and loved it, however, there are some things we would change.

Ha Long Bay, with its magnificent views of towering islands, has been voted one of the 7 natural wonders of the world. With 1969 islands, every turn there is something to see, new karst, new views, new memories. It felt like a whole different world to that of the hustle and bustle, beeping scooters and the pollution of Hanoi. Ha Long Bay is peaceful, serene, with fresh sea air to detox your lungs.

Our boat was named Garden Bay 2, and after having lunch on the boat we went kayaking! Yay! We paddled around a huge island, passing floating villages and fishermen along the way. The most beautiful sight was the archway through one of the islets, with a view to the open ocean beyond. It looked other-worldly like the mountains in Avatar, yet instead of ‘mountain banshee’ flying overhead, sea eagles fly, hunting for their prey. Leisurely we paddled, away from the rest of our group (22 of us in total) and across the sea, weaving between the islands. Stunning.

Our beers were shared out (classic British way!)…

Back on the boat. We heard the prices of drinks on board were high, so we came prepared with a crate of Ha Noi Beer. Sitting on the deck, sipping a beer, sailing through the day… what more can you ask for? We got too busy chatting to some of the group that we missed the ‘cooking class’ (more on that later) and the squid fishing. Ah well. We drank with a mix of German, Australian, and American couples. It was such a funny night, we were all joking, laughing and telling funny stories of our holidays. Our beers were shared out (classic British way!) and minibar’s were raided. Alcohol, the best way to make friends! (Only if you’re over the legal age – drink responsibly!)

Day 2. The ‘Could Have Been Better’ day.

Even though I was hungover, I still got up at 6am to do Tai Chi on the boat deck. Bit of a waste of time as most of the lesson was spent stretching. It was great however, to be on the deck with the fresh, warm, morning air.

After breakfast, we said goodbye to our new friends, they were only doing the one night. We waited (and waited) for a second boat to pick us up. After an hours wait, this new boat arrived and took us further into the bay, away from the other boat tours to a more remote part of Ha Long. Here we were able to kayak again and appreciate the views. We headed over to a secluded beach where fish surround your feet in the shallows. The white sand tickled your toes as you look out to the dotted islands on the horizon. Swimming is currently banned in most of Ha Long Bay due to a tourist having an ‘accident’ in strong currents. That is all our tour guide could say about that. Our boat took us into a “designated swimming area” and here we were allowed a short dip. As you may know from my post on Koh Tao, I have only just learnt how to swim, so I’m not yet confident in going straight into the deep water. Pete however was loving it! Jumping off the side of the boat, bobbing about like a buoy in the sea. 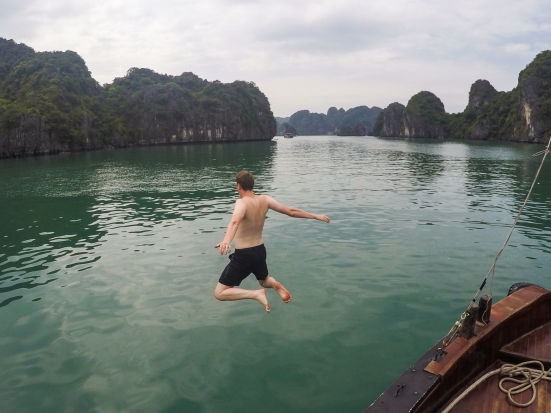 When we got back to Garden Bay 2, we had 2 hours of nothing time whilst we waited for the newbies to arrive. They would have done the same itinerary as we did the day before. The people shouldn’t make a break a trip for you, but we met a great bunch on our first night. Come the second, we felt like outcasts. We tried to get involved with them by taking part in the ‘cooking class’ where we learnt how to roll rice-paper spring rolls – no cooking involved. But we were hungover and not in the mood to be sociable! Early night for us.

The views are phenomenal and the whole area is so peaceful.

We headed to a cave, nothing special, and packed full of tourists. Boat after boat came in waves and filled the cave so you were drowning in the crowd. No chance of getting any photographs without someone practicing their selfies in the background. We then headed back to the harbour, leaving behind the best views and replacing them with tankers, tour boats and city buildings. This was where they decided to serve lunch! And that was all we did that day. Back to the harbour and back to Hanoi.

So, 1 or 2 nights in Ha Long Bay? Even after writing this post, I still can’t give you a definitive answer. That may not be what you wanted to read, I’m sorry! But I feel like if we had just done the one night, that second morning just wasn’t enough to feel worth it. We would have felt like we needed more time. But doing two nights, we felt like the second day had too much wasted time, it needed a better itinerary. I would have loved to have visited somewhere with a viewpoint over the islands, and it would have been great if everyone on the boat was doing 2 nights too. But none of that can take away how pretty and calming Ha Long Bay is. The views are phenomenal and the whole area is so peaceful. It’s no wonder it draws in millions of tourists each year.